Today was the first time I took the girls to the doctor together. I figured it would be easier to kill two birds with one stone and by golly I think I was right. It was a bit to manage, but now that Piper can understand and listen a bit, I don’t have to be so hands on. It was Ellie’s 3 year check up (yes, I know it’s a couple of months late) and Piper’s 18 month check up.

First, Ellie stood on the scale and weighed in at 36 pounds, in the 80th percentile. Her height was a half inch from 40″, putting her in the 75th percentile (although I could have sworn the nurse said 95th…tomato tomahto).

Piper laid in the baby scale (in a surprisingly compliant way) and weighed in at 22 pounds, in the 50-75th percentile. Her height is 32.5 inches, in the 75th percentile. Both girls are normal, happy and healthy, so I was very happy. The one part I was a little nervous about was the shots. Not so much because I can’t handle shots (because I can), but because if one totally melted down, odds were the other one would too and what a fantastic mess to work through. I know it’s not that big of a deal, but it’s those little things I think about.

I was surprised when the nurse came back in with the shots that Ellie said she wanted to go first. Before, when the doctor came in I asked Ellie if she wanted to go first or if she wanted Piper to go first and she said Piper. But when the nurse came in with the shots, she was ready to go. I explained to her earlier in the day that I put her Supergirl underwear on because she was going to need to be a big strong girl when the doctor gave her medicine later because it might hurt a little bit. I told her that the medicine would make it so she didn’t get really sick later on. When she sat on my lap I said “Are you ready to be a big strong girl?” and she said “yeah.” I told her to look and me and give me a big smile. The nurse gave the shot right as she smiled and presto! No tears. Yay!

At this point I think to myself that if Piper cries, at least I was one for two. Piper jumps on my lap and I ask her if she’s ready to be a big strong girl. She says “yes” and doesn’t cry either. I feel like I should buy a lotto ticket today!

Piper turned four months old on Sunday, so we did her typical monthly photo shoot (see below). Today we went to the doctor for her four month checkup and everything looks good. She’s doing great developmentally and growth wise. Here are her stats: 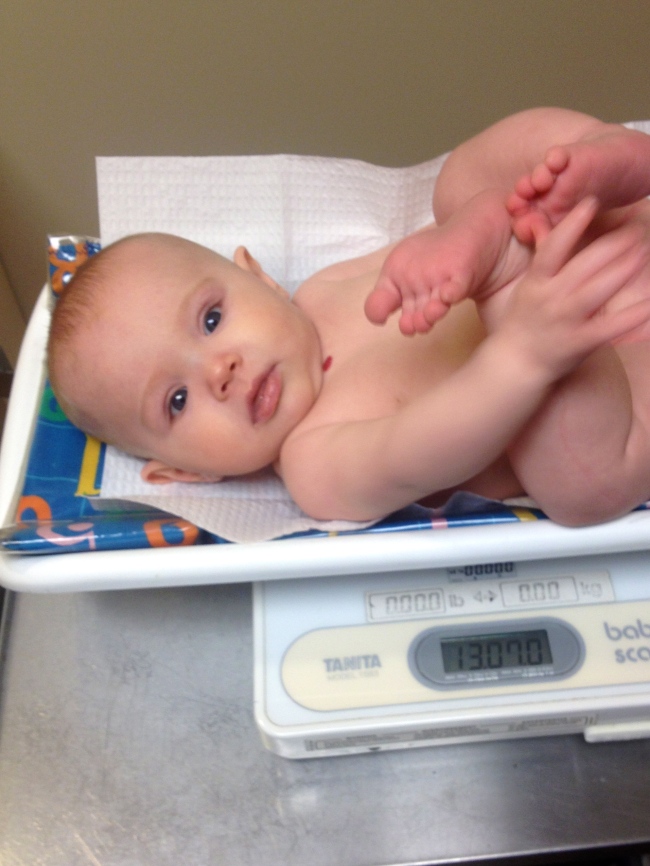 Developmentally, she is rolling (see previous post) and Ruoyun said she scooted about five feet yesterday, but I’m not sure if that was assisted or not. It’s a very exciting time to see all these firsts! Honestly though, the only thing we’re really hoping and praying for is the day she starts sleeping all the way through the night.

Our doctor also gave us the green light to introduce foods. He said waiting until six months is really a thing of the past and they’re starting to find evidence that introducing foods earlier, around four months, may actually be beneficial for food allergies, etc. He also said sometimes when parents wait until six months the baby has lost interest in solids, but that’s not super common.

We had a vaccine today at the doctor appointment and it was so fabulous! Oh, is that an oxymoron? I know it’s weird, but I nursed her while they gave her the shot and she didn’t wince or cry. It was wonderful. I hope she doesn’t get a fever or have any side effects. When we dropped her off at her daycare, Ruoyun told us she would give her some massage today – that makes me so happy!

Here is her four month photo and a compilation of every month until now: 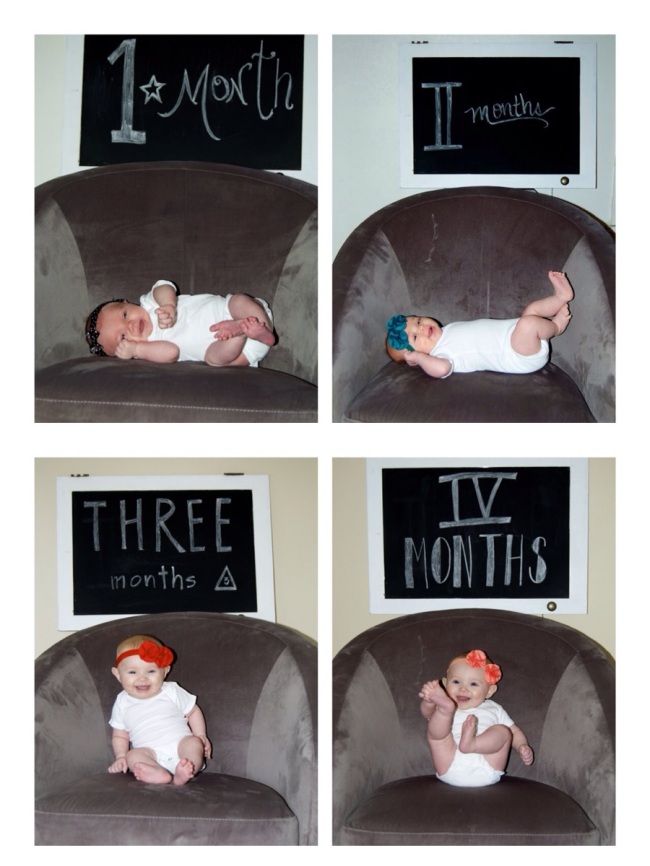 The first two and a half weeks with Piper have just flown by. It’s a-whole-nother ball game when you have an infant with a toddler in the house; we’re keeping very busy with the two of them.  It’s definitely comforting to have done this newborn phase before. We’re not nervous about every single little thing. At the same time, we’re focused on giving as much of a comparable newborn experience to Piper as we did to Ellie. We want to make sure and hold her the same amount of time, talk to her just as much, etc. However, there are some less crucial things we haven’t been as concerned about. For instance, yesterday I gave Piper her first bath – she was two weeks and a half weeks old! I think we gave Ellie her first bath within the first week. Both of them hated every minute of it, so I’m not really too concerned that we waited with Piper…babies smell so yummy anyway!

We also had Piper’s first doctors visit last week. I can tell she’s been growing really well and I know she’s been eating great, but Brian and I were a little concerned about her apparent tummy discomfort. I liked that our doc asked a lot of questions and explained the possible issues: colic, milk protein allergy, or acid reflux. He said based on what we told him he wasn’t concerned about the last two and that she was probably just having some mild colic because her tummy is still developing. He suggested continuing to emulate the womb experience via the 5 S’s. He said at six weeks we’ll start to see improvement with her discomfort. We also saw our midwife the day after and she recommended a probiotic

, which will help her stomach bacteria process food better.

Piper’s weight was 7 lbs., 11 ounces and she had grown a whole inch! Her head circumference was in the tenth percentile. Other than that everything looks great and she is a healthy strong babe. In fact, she’s been holding her head up so well I thought it might be interesting for her to try some tummy time yesterday. I was amazed she didn’t flip out right away like most babies during their first few months. She seemed to really enjoy looking around. Here is a quick clip of it:

We also did a newborn photo shoot last week, which I am so excited about. We didn’t do newborn photos with Ellie and I really regret it. I’m glad we were able to find a quality photographer for a reasonable price and she provides us with all the digital files by next Monday. It was hotter than a mo-fo in the studio room, but it was totally worth it. You can bet your bottom dollar I’ll be sharing soon.  Here is her website in case you’re interested or just want to peruse some adorable little baby pics.

I’ve never been a fan of curing all my pains with drugs, but let’s face it, I went through my fair share of Ibuprofen in my ’20’s; I’m not sure how I would have made it through some days without it! As I’ve gotten older and become a parent I’ve learned a bit about moderation – and also a bit about medicine and medicine alternatives. Especially when our little babes get sick we want to find the quickest solution to make them feel better. I’ve learned over the past 20 months or so though that some things can be done without turning to Western medicine solutions. Below are just a few of the little tricks I’ve learned along the way. The big caveat is: I’m not a doctor and sometimes you just need a doctor. Hopefully some of these things help you need a doctor a little less though.

These are just a few of the tricks off the top of my head. I’ll continue to update this as I hear more from friends, midwives and blog posts, as I think it’s super helpful for those desperate sickness times.  Good luck braving the winter with your little ones and remember, sometimes rest is the best cure for our mommy busy bodies.

I recently had a friend break the news that she is preggers! It’s always so exciting to see other people go through this for the first time. I remember the excitement and the nerves, the elation and the shock. When said friend told us she was pregnant, Brian proceeded to have several crowns with her husband, tell the couple that everyone is going to give them advice, and subsequently give them tons of advice.

The experience got me to thinking: I should write a blog post on my advice to new moms. Now that I’ve had a few friends go through being pregnant and having a baby, I have a few opinions of my own and it’d be great to have a place I could send them to as a resource instead of spilling 10 million recommendations onto them in one sitting, a la BT after several crowns…love you babe:)

I preface this advice with this: We decided to have a very unpopular birth plan and I completely understand it is not right for everyone or even most people, so my advice is not that everyone should do it the way we did.

At the end of the day, once your baby is born, it’s important to pick a few things that are the most important to you and try to do them as best you can. I recommend staying away from perfecting everything. Don’t tell your kid not to do every little fun, dirty, crazy thing they try because we all have to learn from experience. Additionally if you tell them not to do everything it seems like that ultimately causes them to do everything. Life is all about balance. Have fun and don’t take yourself too seriously – that was difficult for me in the beginning. After all, what could be more serious than shaping and forming a human being? Ironically, us being happy and healthy as individuals, parents and partners is just as important to shaping and forming a human being as all the other stuff, so prioritize that as much as possible. Have fun on the ride – it definitely is fun, exhilarating, emotional, and scary – and we wouldn’t change it for the world!