Every once in awhile, I like to do an off-children-topic post. I recently went to a friend bridal shower and I for me, I know getting married made me even more excited about these events. One of my friends, Danielle, got me a silky robe with my new name, “Mrs. Thompson” embroidered on it for my bridal shower and I just thought it was the sweetest, most thoughtful gift. I started getting gals that for quite awhile and I’ll probably do it again in the future.

For this bridal shower though, I copied my friend Rachel, who did a wine basket bridal shower gift for our friend Danae. She told me she found the idea on Pinterest, so I started poking around. Sure enough, there was lots to find. So, I read a bunch of blogs about how to make the basket and I started my project with my own personal touch.

First, Devon registered for this awesome party bucket, which I used for my base. I found this .pdf template of the poems on a blog linked to from Pinterest. I copied and pasted the text into word, changed the fonts and the color of the text, but surely you could just print them off as is as well. I had some leftover paper with different prints on it. I printed off the poems, cut them out, secured them onto the printed paper and voila, tags. I also happened to have a wine bottle punch from a previous project, so I punched a few wine bottles to jazz up the tags. I had some cute “ribbon,” so I used a heart punch I had and threaded the “ribbon” through it.

I also happen to collect corks – for no apparent reason since they just sit in vases or drawers occupying space that could otherwise be used for good. This was the perfect allocation of said corks. I dumped them all in the bottom and situated my wine bottles. I read on one blog about buying some washcloths or towels on the registry to help protect the bottles, so I did that as well.

Here’s the final product. It was so fun to make and hopefully the bride to be will enjoy them throughout the year following her big day, always reminding her of the magnificent wedding. 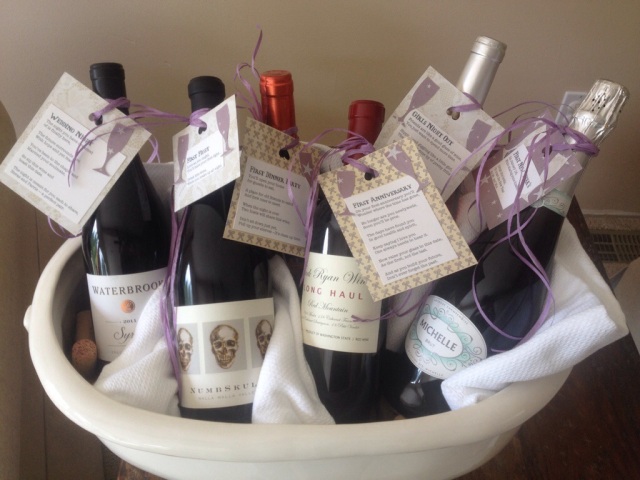 Having a toddler definitely makes me realize what human beings would be like without social norms and evolution. They are so super adorable all the time, even when they’re being defiant. But mostly they’re really fricking hilarious. Below are some of our favorite comments from Ellie lately. Do not read if you’re not okay with non-PC comments.

We got to our hotel room on vacation and Ellie was standing on the luggage cart. She says “I want pushes.” Brian looked at her, concerned about her bossiness and said “I want smooches” and gives her a little pucker. Without skipping a beat she says “they’re all gone!”

Ellie sat down on the toilet with Brian in the bathroom. The second she sits down she says “I went little poo poo.” Then Brian says she makes a face like she’s in pain and he says “Ellie you don’t have to push like that.” She continues to strain and after she’s done straining she looks in the toilet and exclaims “it’s an alligator poo poo!”

Ellie has a figurine of Cinderella, which she picks up and says “Mommy I’m going to put Cinderella’s butt in my mouth,” and she proceeds to do so.

A lot of what comes out of Ellie’s mouth these days that’s comical has to do with potty or pee pee’s, but there’s also a lot she says that makes me so incredibly proud. It’s amazing to see her brain develop at such a rapid rate. A lot of times her brilliance comes out when we’re sitting in the car on the way to or from school, I think likely because she doesn’t have much else to do. She’ll sing songs; her faves are “Twinkle Twinkle,” “The Wheels on the Bus” (or as Ellie likes to say, “The Wipers on the Bus”), “Ring Around the Rosie,” “Rain, Rain, Go Away,” “Mr. Golden Sun,” & “Happy Birthday.” She likes to say her ABC’s and she likes to say over and over again “Butterfly, Butterfly, landed HERE.”

Tonight when I was reading one of her books, A Very Busy Spider, she started saying everything that was on the pages. It was just so neat to really see that she is a major sponge right now.

It’s so funny to think about the definition of brilliance and I think about it a lot when I see our babies developing. I think every parent has these same moments – where they see such brilliance in their children. Wouldn’t it be an interesting world if we all saw brilliance in each other?

Piper turned seven months and she’s just been going going going. She is one of those babies that’s very engaging, very smiley, very excited and very on the go. In fact, she will seldom lay on the changing table long enough for us to change her diaper. Most of the time we can lay her down to take it off and wipe, but then we have to stand her up to put a new diaper on and put her clothes back on.

She’s progressing quite quickly as far her mobility goes as well. She loves to pull herself up on anything possible. She went through a phase for a week or two of not being able to hold herself up once she got up or crawling so fast she would run into stuff. That was a very difficult couple of weeks because no one likes Piper bruises. It seems that time has come to an end though. Every time she pulls herself up she stays up and she knows how to let herself down more gently. She’s also letting go sometimes and standing for a few seconds, which is very exciting. While no parent wants to hover, I find it very difficult to not be ready to catch her when she’s exploring like this.

Piper’s also been experiences the same “teething” Ellie did around this time. I put “teething” in quotes because there aren’t actually any teeth. Ellie was the same way – there are spurts of massive salivation, gnawing on pretty much everything, some fever and discomfort. It’s no fun at all, but we’re done with the most recent teething event, so nothing to complain of for the time being.

Piper’s still not sleeping through the night, although she has gone for long stretches. She sometimes won’t wake up until 3:30 or so, which means 7-8 hours of straight sleep. The problem is, it’s straight sleep for her, but not us, since we don’t go to be until 11ish usually.

Ellie’s also still joining us in the middle of the night every night. We pretty much gave up on trying to take her back to her bed because it just caused us to lose more sleep. So instead we get kicked and woken up by crying almost every night. Oh the joys of parenting. I know I’ve said it before, but it really is all worth it. To see these cute little faces every day, to see them giggle and grow and play and sleep is totally all worth it.