Since it’s been announced on Facebook, it’s now official to the world: we’re having our second baby!  People keep asking me if it’s been the same and I would definitely say no. I feel mostly the same as far as my body goes, but time is just flying so much faster. When we found out we were pregnant again, I didn’t rush out to the doctor because I knew what they were going to say. I didn’t have to start scanning websites or reading books to know what is going to happen. We’ve been through this before, so we know a little better about what to expect.

Now that we’re already to 23 weeks, it’s hard to believe there are only 17 more left to go. Ellie’s growing like a weed and learning so much. She’s a total chatterbox and such a sweetheart. We couldn’t really feel more blessed. We’re really cherishing this moment in our lives because while it’s very very very very hard work raising a little girl and being in a new house and both being working parents (did I mention it’s hard?), it is such a joy and we know opposite of this feeling so we appreciate it even more. 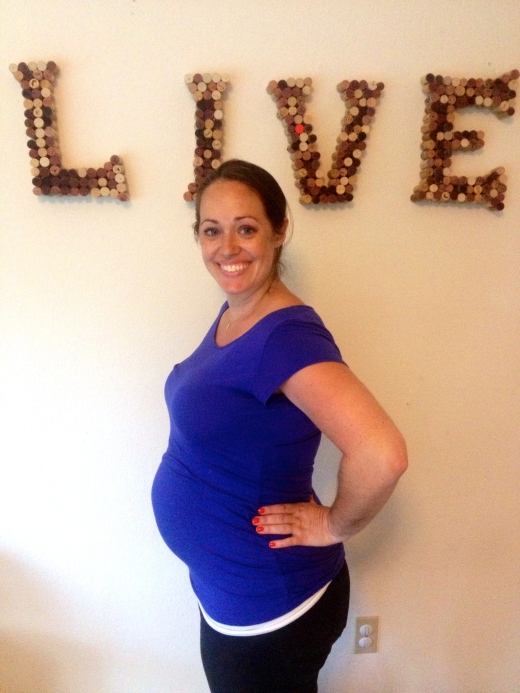 It’s tough with a baby because we really try to make life a little easier on ourselves. We don’t cook extravagant meals anymore. We don’t spend hours getting ready; why bother when you’re going to have food in your hair in 20 minutes anyway? We try to be a little more efficient with our cleaning. It’s the little things that change when you have a kid. All that being said, I really wanted to do a fun announcement for the pregnancy and gender, so where did I turn? Pinterest, of course.

I found a cool idea of putting an egg into a box and having a little message inside it. I thought back to my days of elementary school and blowing the middles out of eggs and quickly put together a plan for this project. In case anyone is interested in doing it in the future, I’ve outlined the steps below and provided some photos of the finished product.

Step 1: Buy a bunch of cheap eggs, the box you want to put them in, spray paint, shredded paper, large labels, a punch if you like and some string. We picked purple for ours, but you could always pick whatever color speaks to you. You will also need a thumb tack, some skewers, paper, a printer and scissors.

Step 2: Poke holes in either end of the egg with a thumb tack and blow out the yokes and white. We used a ShopVac for this; otherwise it will take you hours. Let the eggs dry out.

Step 3: Spray paint the eggs. Let try. We used some skewers and styrofoam to hold the eggs up so we could spray them while they were not on the ground.

Step 4: Print your announcement. Ours said “Ellie’s baby Sister, Coming November 6, 2013, Blessed, the Thompson’s,” but you could say a multitude of different things.

Step 5: Cram the announcement into the eggs. I used a thinner skewer to wrap the paper around and then poked it through the hole. It’s worth mentioning that we made the holes larger than the thumb tack we used to poke them. It was difficult to get the papers in, but we managed.

Step 6: Put the shredded paper in the boxes as a little nest

Step 7: Place the egg in the nest. It’s worth mentioning that if you wanted to decorate your egg or cover the holes somehow, there’s always room to get creative here.

Step 8: Print instructions on the label. People have to know what to do when they open the box so we printed “A Surprise Inside, Crack me Open” on a large label.

Step 9: Use a punch to punch out the label. This is optional, but I think it makes the announcement look a little less generic.  Place the sticker in the box.

Step 10: Close the box and tie a ribbon around it

For people we see frequently, we hand delivered the box, but for most people we dropped it in the mail. We used FedEx, but you could use any carrier your heart desires.  It was a super fun project and a few people reached out and said they really enjoyed receiving it, so we felt like it was definitely worth the energy.  From here on out though, we’ll likely go back to being our efficient selves – until I get another wild hair in a few months;)

One thought on “#2 Coming Soon”

Our Second Turns 2November 2nd, 2015
Coming in 2015: we'll celebrate the big milestone of two years!
%d bloggers like this: